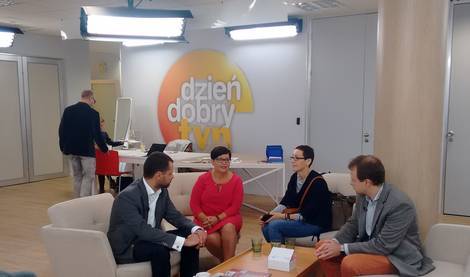 The search for family members in Poland was a special focus of the restitution campaign in 2017. This is because most of the personal items preserved by the ITS belonged to Polish people persecuted by the Nazis. Various trips to Poland, contact with Polish journalists and the active support of volunteers all had an effect here. The ITS was able to use a variety of channels to publicize its search. A topical feature on Polish TV with ITS employee Małgorzata Przybyła was especially effective in attracting public attention. A report on returning the possessions of a former concentration camp prisoner, an interview and live broadcast of the handover and a call for support on Polish breakfast television all made an impact: immediately after the broadcast, the ITS received around 300 responses, eventually getting 600 in total.

“Our campaign isn’t really a topic for breakfast television, but you can reach a wide audience on a Sunday morning,” Małgorzata Przybyła said. “It was important to raise awareness of the work of the ITS and its collection of personal possessions among ordinary viewers in Poland – and to show that you can contact the ITS in Polish and help with the search.”

Małgorzata Przybyła was very moved while the report was being filmed. She was able to return a document to a man near Poznan which included a photo of his father, as well as his father’s trouser suspenders and a mirror. “The man then told me how much value his father had always placed in his appearance, that he was always dressed elegantly,” she explained. During the live broadcast, she returned a watch to the grandchildren of its former owner, whom she had been able to track down. She also showed some of the personal possessions from the archive during the live broadcast. “We chose a wide variety of objects to show the entire spectrum of items,” Małgorzata Przybyła said, “and we pointed out personal features.” For example, she presented the signet ring of a man from whom the ITS also has photos and a vaccination record.

Local historians quickly took up the search for the owner of the signet ring. The many dedicated volunteers were finally able to find traces of him. “It was worthy of a movie, the way everyone pitched in, from the historian to the mayor,” the ITS employee recalls. “For me, it is a mission to be allowed to carry out this work. When we return their keepsakes, the people come back to life for a moment in their family’s memory.”