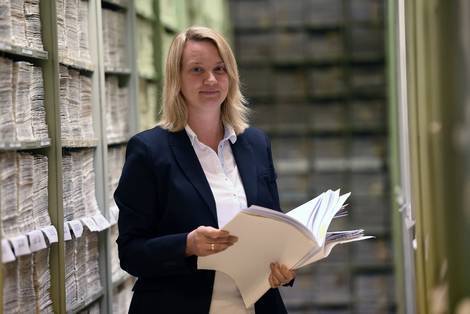 Anna Meier-Osiński, head of the tracing department at ITS, is particularly concerned about the return of personal items to families

Anna Meier-Osiński, Head of the Tracing Department, has worked at the ITS since 2015. She explains how and why the ITS is actively seeking to return personal items from the concentration camps – and how valuable these keepsakes are to the families who receive them.

How long has the ITS actively sought the rightful owners of the personal effects of former concentration camp prisoners?

For a long time the ITS would not initiate a search without being asked. But we think it is extremely important to do everything we can to return these personal possessions to the family members. We therefore conducted test runs in 2016 and searched for traces of the families in institutions and archives. Our success prompted us to keep going. Now, for the first time since the 1960s, we are actively seeking relatives in order to return the personal belongings of concentration camp prisoners. For many years, the former management of the ITS thought that all search channels had been exhausted. Belongings were only returned when survivors or their families contacted the ITS themselves.

The ITS has its own in-house tracing specialists, after all. And thanks to social media, the online archive and other media campaigns, these specialists can find external supporters very quickly...

Exactly. The ITS employees responsible for this have been very successful with this active search. Television appearances have also raised the profile of the ITS tremendously, as we saw in the Netherlands and Poland, for example. Afterwards we were able to expand our network over the internet and attract many dedicated helpers.

Which countries do most of the rightful owners come from?

We have many keepsakes from concentration camp prisoners from Germany and Poland, but also from people from the former Soviet Union and France. Most of the objects come from Neuengamme concentration camp. We have many watches, rings and other jewelry, but also everyday items such as mirrors and powder compacts. There are also briefcases, certificates, identification papers, letters and family photos.

There must be a lot of clues in the documents.

Yes, names and places are naturally important clues. And the incentive to return photos is especially great. You can imagine how important photos are to the family members. After all – unlike in our digital age – very few photos were taken back then.

Is this why the ITS is returning these objects to the families instead of placing them in a museum?

Personal possessions that we have not yet been able to return are also available for exhibitions. But we mustn’t forget: the Nazis stole these items from people. There are names attached them, and the reason we have them is so that we can return them. They are part of a family’s memory. The emotional reactions we see confirm this. People are surprised to find out about the existence of such possessions after more than 70 years, and they often feel that fate has smiled on them. They might not have known much about their family history, but they learn about it when the mementoes are returned.

So you plan to keep going with the active search?

Yes, definitely. The #StolenMemory campaign is a very important project for us. We are going to expand its radius and look for relatives in more and more countries. Our experiences carrying out research in Poland, Germany and France will help us with this. The many objects we returned in 2017 are a big motivator!