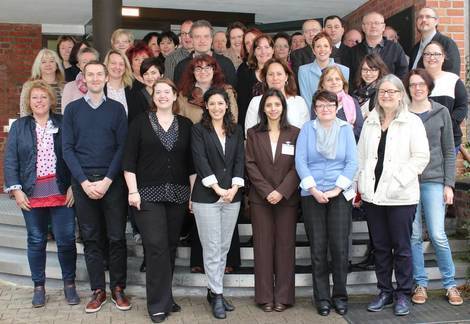 The ITS is continually improving access to the around 85 percent of its archival documents pertaining to Nazi crimes and their consequences that have already been digitized. At the international workshop on “Improving Access to the ITS Archives” in March 2016 in Bad Arolsen, representatives of the partner institutions of the ITS learned about strategies and tools for searching the digitized ITS archive. One focal point of the workshop was the interaction between copyholders and ITS employees.

The event had nearly 50 participants and was organized by the ITS together with the Wiener Library in London and the United States Holocaust Memorial Museum (USHMM) in Washington, D.C. It was an important step in the strategy of the ITS to play a new role in its network of copyholders. ITS Director Floriane Hohenberg said: “As the nucleus of the user network around the digital ITS archive, we will hold annual user workshops at the ITS starting in 2017 in order to share knowledge about the collections and research strategies."

This workshop in Bad Arolsen was about working together directly with the staff members of the ITS and sharing solutions. And it worked – everybody learned from the experience.

Christine Schmidt, Director of Research at the Wiener Library in London